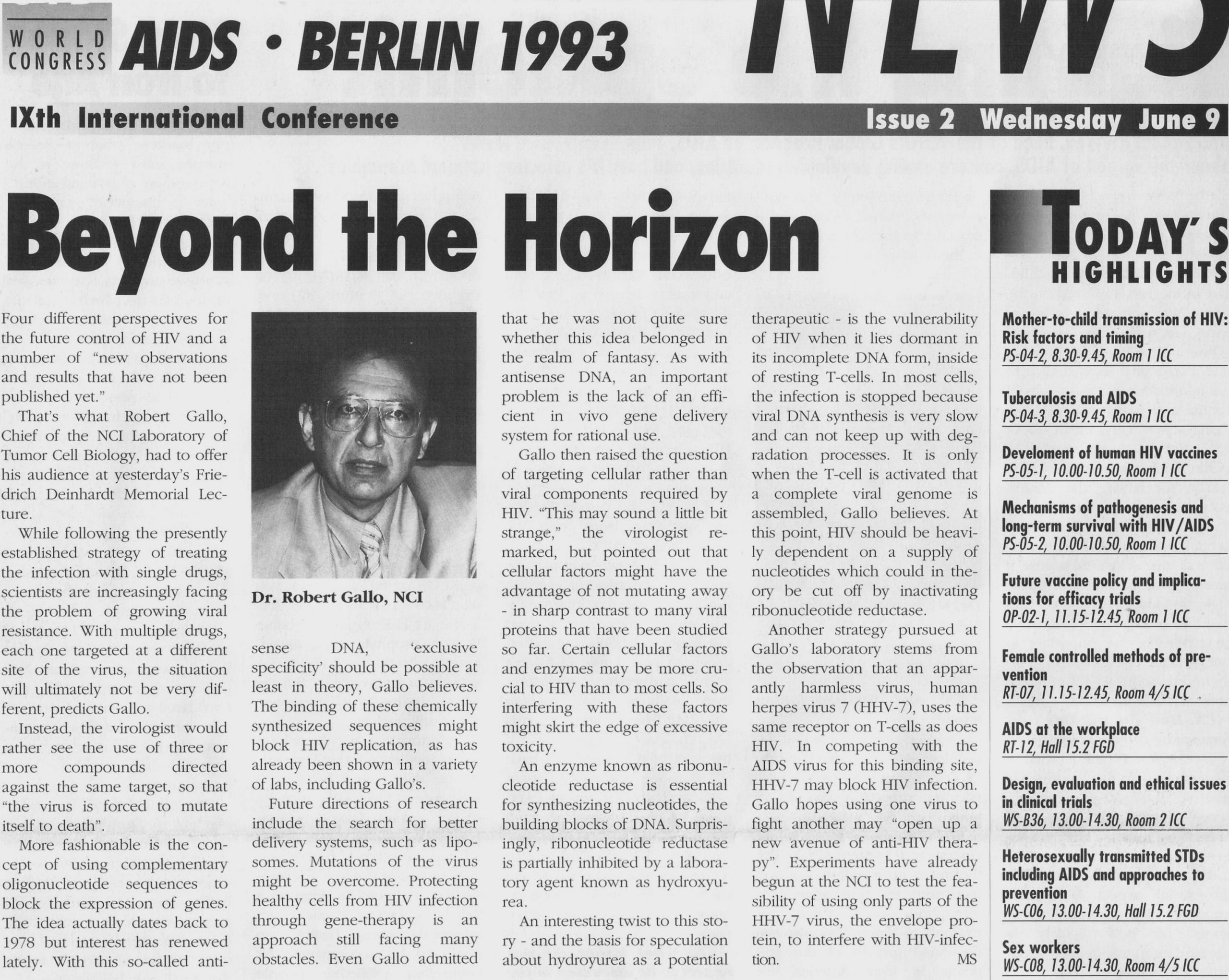 Four different perspectives for the future control of HIV and a number of „new observations and results that have not been published yet.“ That’s what Robert Gallo, Chief of the NCI Laboratory of Tumor Cell Biology, had to offer his audience at yesterday’s Frie­drich Deinhardt Memorial Lec­ture.

While following the presently established strategy of treating the infection with single drugs, scientists are increasingly facing the problem of growing viral resistance. With multiple drugs, each one targeted at a different site of the virus, the situation will ultimately not be very dif­ferent, predicts Gallo. Instead, the virologist would rather see the use of three or more compounds directed against the same target, so that „the virus is forced to mutate itself to death“.

More fashionable is the con­cept of using complementary oligonucleotide sequences to block the expression of genes. The idea actually dates back to 1978 but interest has renewed lately. With this so-called anti-sense DNA, “exclusive specificity” should be possible at least in theory, Gallo believes. The binding of these chemically synthesized sequences might block HIV replication, as has already been shown in a variety of labs, including Gallo’s.

Future directions of research include the search for better delivery systems, such as lipo­somes. Protecting healthy cells from HIV infection through gene-therapy is an approach still facing many obstacles. Even Gallo admitted that he was not quite sure whether this idea belonged in the realm of fantasy. As with antisense DNA, an important problem is the lack of an effi­cient in vivo gene delivery system for rational use.

Gallo then raised the question of targeting cellular rather than viral components required by HIV. “This may sound a little bit strange,“ the virologist re­marked, but pointed out that cellular factors might have the advantage of not mutating away – in sharp contrast to many viral proteins that have been studied so far. Certain cellular factors and enzymes may be more cru­cial to HIV than to most cells. So interfering with these factors might skirt the edge of excessive toxicity.

An enzyme known as ribonu­cleotide reductase is essential for synthesizing nucleotides, the building blocks of DNA. Surpris­ingly, ribonucleotide reductase is partially inhibited by a labora­tory agent known as hydroxyu­rea. An interesting twist to this sto­ry – and the basis for speculation about hydroyurea as a potential therapeutic- is the vulnerability of HIV when it lies dormant in its incomplete DNA form, inside of resting T-cells. In most cells, the infection is stopped because viral DNA synthesis is very slow and can not keep up with deg­radation processes. It is only when the T-cell is activated that a complete viral genome is assembled, Gallo believes. At this point, HIV should be heavi­ly dependent on a supply of nucleotides which could in the­ory be cut off by inactivating ribonucleotide reductase.

Another strategy pursued at Gallo’s laboratory stems from the observation that an apparently harmless virus, human herpes virus 7 (HHV-7), uses the same receptor on T-cells as does HIV. In competing with the AIDS virus for this binding site, HHV-7 may block HIV infection. Gallo hopes using one virus to fight another may „open up a new avenue of anti-HIV thera­py“. Experiments have already begun at the NCI to test the fea­sibility of using only parts of the HHV-7 virus, the envelope pro­tein, to interfere with HIV-infec­tion.